lives and works in Nara.

Under the name of Mathieu Martin, he had been developed audio and visual works , which had no particular direction nor visible form, for the goal to give to the spectators a physiological feeling. By this point of view, he creates also scenography and worked with French visual artist Marc Plas.

His solo work concern about "no-sence". He tries to create "a sensory space", not only musical work. For realise it, he use different means, from acoustic to electric, from analog to digital, from stereo to surround.

In Tokyo He organizes also the "croisements" festival Tokyo edition (solo improvisation festival - postponed now) for the reflection about the nature of improvised music and in Kagoshima prefecture "croisements kagoshima" concert series. 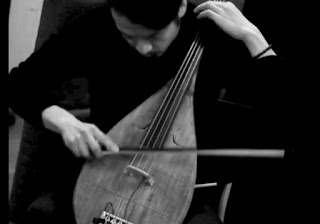